‘Sethusamudram project, a concluded chapter’NT Bureau
Chennai, Oct 11:         AIADMK general secretary J Jayalalithaa today said the Sethusamudram project was a concluded chapter and it could not be continued anymore.         Coming down heavily on Chief Minister M Karunanidhi and Union Shipping Minister T R Baalu in a statement here, Jayalalithaa said Baalu was making funny statements about the project like a ‘clown’.         Stating that the Union Minister had recently said that 70 per cent works were over, the AIADMK supremo wanted to know whether he was ready to arrange for a trip of AIADMK MPs, MLAs, scientists and journalists to the canal to make them aware of the real status.         ‘Karunanidhi know very well that the project was a mere waste and the canal could not accommodate heavy ships which were being used in large number nowadays. However, he struggles for the implementation of the project for his own interest.’         Jayalalithaa alleged that Karunanidhi had ‘swallowed’ thousands of crores of rupees in the name of Sethusamudram project.         Recalling Veeranam project and Cooum rehabilitation scheme which were ‘announced by Karunanidhi in his earlier tenures’, the former Chief Minister said Sethusamudram was also a similar one to corrupt people’s money.         ‘Even the Union government is not ready to invest in the Sethusamudram project anymore and had assured in the Supreme Court that it (the project) had been adjourned,’ she said.         Jayalalithaa also said there was no security for Tamils who are visiting northern parts of the country following the remarks made on Lord Rama by Karunanidhi.         She said Karunanidhi was making such statements in Tamilnadu since he was in power and wanted to know whether he was ready to reiterate his words in a public meeting in New Delhi.         ‘If he comes forward, AIADMK will bear all the expenses of his travel,’ she said.         In another statement, the leader of the Opposition in the State Assembly has said her party would conduct a massive agitation in front of the Red Cross Society at Coimbatore to condemn the State government for not providing basic amenities in the city.         She said Jayalalithaa Peravai secretary N Thalavai Sundaram and district secretary S M Velusami would led the protest. http://newstodaynet.com/11oct/ld2.htm ‘CM remarks threatened Tamils’ security in North’

Chennai (PTI): Alleging that the anti-Ram remarks made by Tamil Nadu Chief Minister M Karunanidhi had caused security risks to Tamils living in the North, AIADMK supremo Jayalalithaa on Thursday dared the DMK patriarch to repeat his remarks at a public meeting in New Delhi. “Karunanidhi has not visited Delhi in recent times as he is aware that the people in North India are looking at Tamils with contempt and also castigating him (for the remarks),” she said in a statement here. “Karunanidhi is emboldened to insult Lord Ram as his party is in power in the state and he has police protection. Does he have the courage to make such remarks at a public meeting in Delhi? If he is ready (to take up the challenge), the AIADMK is prepared to bear his travel expenses,” she added. Coming down heavily on Karunanidhi for his statements on the Sethusamudram Shipping Canal Project (SSCP), Jayalalithaa said the project was a “closed chapter” as there was no possibility for its completion. She said the SSCP was implemented without making any proper geological and economical feasibility studies. As the depth of the channel would be only 12 metres, ships with less than 30,000 tonnes of weight could only cruise through it. “However, massive ships of more than 1.5 lakh tonnes weight are being built and utilised now,” she added. Jayalalithaa charged the Centre with wasting crores of rupees on the project and implementing it in a “slipshod” manner due to the ‘pressure’ exerted by Karunanidhi. Questioning Union Shipping Minister T R Baalu’s claim that 70 per cent of the dredging work had been completed under the project, Jayalalithaa demanded to know whether he could inform the public about the length and breadth of the channel dredged so far. “Are they ready to demonstrate by running a ship in the completed area ? If so, AIADMK MPs and MLAs are prepared to undertake the voyage. Scientists and mediapersons are also ready to join the cruise,” she added. Jayalalithaa said the DMK chief was unable to speak against the Centre, which “voluntarily gave an assurance to the Supreme Court that it will defer the implementation of the project.” http://www.hindu.com/thehindu/holnus/401200710111421.htm சேது சமுத்திர திட்டப் பணி தனியார் டெண்டர்கள் ரத்து

Surely, there should be limits to swindling peoples’ money from the Central treasury.

Arajaakam is running riot in Bharatam. Rama Setu is now dharma yuddham, a war against a-dharma and continuing subversion of the Constitution of India. 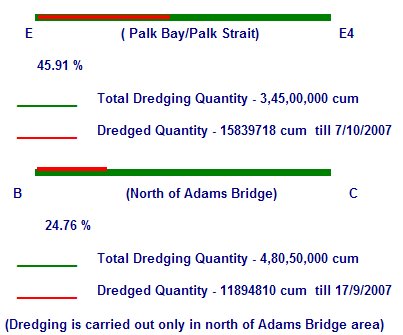 Bharatiya Janata Party condemns the statement of Mrs. Sonia Gandhi calling those who oppose the N-Deal and present alignment of Setu Samundaram Project as enemies of development and peace. It is not only arrogant but smacks of intolerance and dictatorial tendencies. This is precisely the Congress character to call names to those, who oppose their policies, as the forces opposing the country’s progress. Actually, it is the Congress, which has halted the progress of the country by slowing down on various development initiatives of NDA like North-South and East-West corridor and River Linking Project.

Bharatiya Janata Party charges Congress of playing strategic subservience to US foreign policy by rushing through the N-Deal and doing so with collateral purpose.

Nation has not approved the proposed Deal. The majority in Parliament is opposing this Deal and government has not addressed any of the concerns raised by opposition parties. If the Deal is about Energy Security the govt. must reveal the costs involved. 35,000 MW of Electricity over the period of 30 yrs at the investment of 50 $b (2 Lack Crore of Rs.) is not at all in the interest of the country. Even if Suhansiri project in Arunachal is completed it can generate 35,000 MW of hydel Power in next 3 years at much lower cost. Congress must ask the people whether they approve N-Power @ Rs. 15 per unit or hydel Power at Rs. 4 per unit.

Govt. must also explain why they are not reaching out to Nepal on channelising perennial water resources for power generation? Congress must also answer why the govt. is not operationalising Fast Breeder Reactor Programme, which can open up possibilities of self-sufficiency.

As far as Setu Samundaram Project is concerned blame squarely lies with Congress, which has not only hurt the religious sentiments of the people but is bent upon blowing up the Ram Setu. BJP demands that govt. should unequivocally declare that it would complete the project with other alignment and not by cutting through Ram Setu.

Editorial
There are Gandhis and Gandhis

It is understandable that many Indians felt outraged about the UN inviting the UPA chairperson Sonia Gandhi to address the general assembly to mark the adoption of the resolution to commemorate October 2 as the International Day of Non-Violence. This is also the celebration of the centenary of satyagraha.
With the UN address Sonia Gandhi has tried to establish her claim to represent India and the Mahatma, which is what perhaps her mentors and sympathisers are looking for.
For the international audience it is not of much significance as to who represents India. It took almost seven decades for even the Nobel Committee to acknowledge that it committed a mistake in not recognising the Mahatma for the Nobel. There has always been criticism of the political and racist criteria that often come into play in the awarding of these international recognitions. To that extent there is some weight in the belief shared by many Indians that the west is particularly pleased about promoting Sonia Gandhi on the Indian political scene.
To our mind, Sonia Gandhi is the least endowed to represent India in general and the Mahatma in particular. Her surname is an accident of her marrying into the Nehru family. Even this surname has nothing to do with the real Gandhi. There are Gandhians in India who were not only inspired by the great life of the Mahatma but who lived following in the footsteps of the great teacher. They have spent their entire life learning the teachings of the Mahatma. They in their own ways tried to emulate the great leader; they translated him into their own daily chores; they set up ashrams, service centres, served the less privileged living in the remote slums; they wrote and spoke to spread the message of the master, away from limelight and power play. Any one of them would have been more ideal to speak on satyagraha. But the UN did not choose them. They are not white, they are not backed by big players.
One of our columnists recently wrote that Sonia Gandhi is neither the head of the state nor has the stature to address the UN. Even we Indians are often at a loss to fathom her thoughts or understanding of the issues confronting the nation. This has never stood the scrutiny of the media. She has only been parroting what her speech-writers prepared for her for occasional public meetings. Was the invitation only a recognition of her Italian origins?
Indians in the US according to reports reaching us demonstrated against Sonia Gandhi addressing the UN on the Mahatma. In India, too, there were protests by some NGOs which largely went unreported for obvious reasons. The Congress chief in every sense is the opposite of the Mahatma. Only a couple of days before she was to land in New York to address the UN she promoted her son to take over the reins of her party. She treats the party as her jagir. The Mahatma on the other hand after winning freedom wanted the Congress to be dissolved. He refused to propose his own eldest son Hiralal, for a scholarship to study law in London.
The Mahatma insisted on the formation of a national government after independence. He lived to make Ramrajya on this earth. Sonia Gandhi and her allies like DMK and CPM are bent on erasing the name of Sri Ram from Indian history. She encouraged and appreciated M. Karunanidhi in his distasteful and blasphemous statements on Ram and Ramayana. As the BJP chief Rajnath Singh pointed out the ideals of the Mahatma are alien to the new dynastic Gandhis. Promoting such spurious images can hardly be termed a tribute to the great son of India.

SALEM: Dalit Panthers of India, an ally of the ruling DMK in Tamil Nadu, today said it would blow off the Ram Setu if it hindered the implementation of Sethusamudram Ship Canal Project.
“If Ram Setu was a hindrance for the Sethusamudram project, we would blast it off,” DPI leader Thol Tirumavalavan said while addressing a meeting here.
He alleged that the BJP was engaged in “double-talk” with regard to Ram Setu issue.
“BJP brought the project and now they were trying to stall it,” he said adding that the project was “essential” for the development and trade.
He was addressing around 2000 DPI cadres who had assembled to stage a forced entry into the Draupadiamman temple here, which had been locked up for over an year following a dispute between scheduled caste people of the area and those belonging to a particular community.
Tirumavalavan, along with many of his partymen were taken into custody by the police, but were released later.

This entry was posted on Tuesday, October 9th, 2007 at 2:14 am and is filed under Civilization. You can follow any responses to this entry through the RSS 2.0 feed. You can leave a response, or trackback from your own site.